With the CBS Broadcast Center shut down because of two CBS employees tested positive for the coronavirus, the local station had to do a little dancing for its morning newscast.

But not before viewers of the 4 a.m. hour were greeted with with CBSN Boston anchors anchoring. 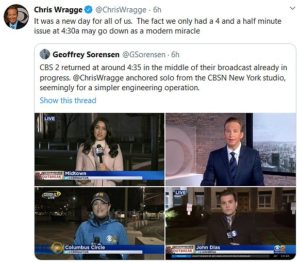 All morning long, Wragge posted on social media, thanking viewers for tuning in and being patient with an unprecedented morning.