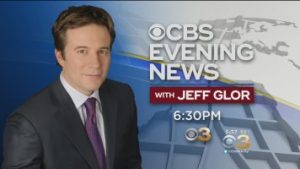 We’ve been reporting recently on the rumblings coming out of Black Rock and West 57th as ratings for the “CBS Evening News with Jeff Glor” continue to evaporate week-by-week.

It even got to the point that a week ago, “Page Six” flatly reported that CBS News division suits were contemplating a change.

Now “The Boston Globe” is picking up on that report and asking the same questions.

Like where did 1.5 million viewers go in the past year?

Granted, division president David Rhodes issued a memo after that “Page Six” item saying reports of a change were “not true” and went on to express the notion that “we have complete confidence in Jeff Glor.”

How many White House staffers in recent years have had “complete confidence” in them expressed just before they hit the door running?

Granted, the Boston paper likely picked up on the story because Glor is a local product. He’s a former WHDH reporter/anchor who joined CBS News 10 years ago..

But the fact that this story continues to have some traction does not exactly bode well for Glor.

And despite a slight uptick for the “Evening News” in May, the handwringing continues, and the clock may be ticking on the Glor era.