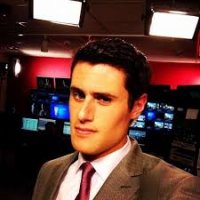 A newly-rekindled passion for his father and grandfather’s profession is prompting Houston tv reporter Jake Reiner to plan his exit from Graham Media’s KPRC later this summer and plot his entry into the family business.

Reiner, who’s been reporting for the station for about 2 ½ years after a brief stay at a station in Podunk…excuse us…Salinas, CA, is the son of actor/director Rob Reiner and grandson of Carl Reiner.

“I’ve always had a passion for acting and performing,” he said in a phone interview. “When I was growing up in LA, and in high school there, I was in all the plays and the musicals. I took improv classes, took stand-up comedy classes and I was always wanting to perform.”

Reiner says it’s time to go home and try his hand at acting because the rush he now gets from reporting the news is not as intense as he’d like it to be.

Because every day in a newsroom is supposed to be a rush.

“I realized the most fun that I had reporting was when I could be creative and do interesting live shots, and ad lib,” he said. “For instance, when I covered the Super Bowl where they sent me to Philadelphia to cover the Eagles fans. I got to do so many creative live shots where I got my hair sprayed green on TV and got mobbed by the crowd … . The adrenaline of having a live audience and getting that direct feedback almost immediately when you’re doing it, I was like, ‘yeah.’ Ultimately, I wasn’t getting that on a consistent basis from doing news.”

That’s where some of us went wrong.

We focused too much on delivering information and forgot it was about personal performance.

His last day is August 3rd.