How the hell does this happen? 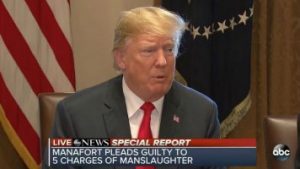 As ABC News was covering – “live” – the announcement by Mr. Trump that he would sign an executive order to put an end to his heartless southern border “strategy,” up pops this graphic:

What the ever loving…

The headline remained on screen for about 6 seconds, before reverting to the previous headline “President Trump: ‘I’ll be signing something’ to address family separation crisis.”

Needless to say, numerous sweaty brows ensued and ABC quickly issued a statement:
“We regret and apologize for the false lower third graphic that aired during our special report. We are investigating how incorrect information was in our system and how and why it was allowed to air.”

Followed a few minutes later by a tweet:
“We apologize to our viewers and to Mr. Manafort. There simply is no excuse for this sort of mistake.”

Now since former Trump campaign manager Paul Manafort is NOT under investigation for manslaughter and never has been, you have to wonder who and why this chyron got created in the first place.

A chyron operator trying to be clever while creating a chyron placekeeper with the idea that it would later be changed?

And try to figure out the content of the tweetstorm that will inevitably follow this egregiously unforced error that does nothing but provide more ammunition in the war against the 1st Amendment.