To paraphrase a reporter we once worked with, “I-it’s called “immersive mixed reality” and here’s how it works.”

The Weather Channel on Wednesday used it to demonstrate the power of a tornado – by wiping out its own studio. 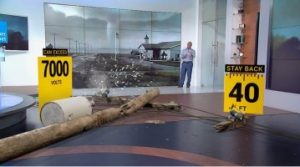 As you might expect, Jim Cantore was in the center of the action which started off placidly enough but soon devolved into a realtime simulation of tornado hell.

An approaching funnel cloud caused a power line and pole to “crash’ onto the studio floor, which was Cantore’s cue to deliver some safety tips.

From there, viewers saw an old clawfoot tub appear – a safety refuge in the event of a hurricane.

In flew a car, and then, the studio itself was “virtually destroyed,”

Throughout the entire segment, audio effects including tornado sirens, wind effects, crashes and emergency sirens play in the background.