You know, before Samantha Bee combined the above word with the name for a female body part to insult Ivanka Trump, the only other time we had heard the word “feckless” with in a song by Nick Lowe (“Hope for Us All” for you completists).

And he’s British, so, whatever.

Well, since Bee’s mini s***storm, the word just seems to keep turning up.

“Feckless”, not that other one.

Meghan McCain once again applied it to Ivanka, this time over the “zero-tolerance” immigration policy of her father’s invention. 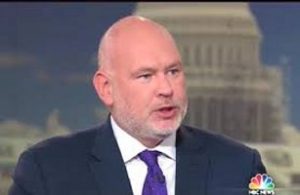 And now we have Steve Schmidt, the GOP operative who ran John McCain’s failed presidential run in 2008.

Since then, Schmidt hasn’t done a whole lot of campaign managing.

He’s been busy being a talking head for MSNBC – a sort of ornamental house conservative who frequently pops up to  be somewhat contrarian, much like Juan Williams over at Fox, who is also frequently trotted out and allowed to speak as the house liberal.
Problem is, Schmidt’s conservatism these days doesn’t square at all with Trumpian conservatism and now that the Republican Party has been subsumed by Trumpism, Schmidt no longer felt comfortable in the party to which he had belonged for nearly 30 years.

So yesterday, he quit the party.
“29 years and nine months ago I registered to vote and became a member of The Republican Party which was founded in 1854 to oppose slavery and stand for the dignity of human life. Today I renounce my membership in the Republican Party.  It is full the party of Trump.”

In a string of morning tweets, the MSNBC contributor called the current Republican Party “a danger to our democracy and values” and decried the separation of migrant parents from their children, calling detention centers “internment camps for babies,” adding that the part is filled with (wait for it) “feckless cowards who disgrace and dishonor the legacies of the party’s greatest leaders.”

Which kind of puts his MSNBC gig as house Republican at risk.