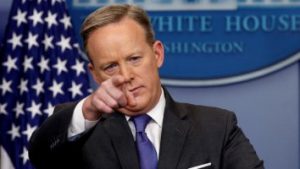 Since no one so far has been willing to step up and make Spicer a lucrative offer as cable or broadcast news contributor, he’s hoping to reinvent himself as a talk show host.

He’s reported to be taping a pilot next month with the tentative title “Sean Spicer’s Common Ground.”

The program would feature conversations between the former White House official and prominent personalities.

Stormy Daniels’ attorney Michael Avenatti and comedian Kathy Griffin have seemingly confirmed that they were invited to be guests on the show but declined to appear.

So far, absolutely no network, cable or streaming operation has expressed interest in the Dippin’ Dot devotee new venture, but we are assured there are some heavy hitters backing Spicer’s play.