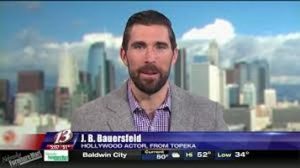 From 2004 to 2014, JB Bauersfeld held forth at Gray’s WIBW in Topeka, KS, starting out as a photographer and eventually becoming sports director.

Then one day, he felt the irresistible pull of Hollywood.

These days, he’s pursuing auditions and interviews with casting directors as he goes after an acting career.
“Some days, there’s a ton going on and you might be on set for 12, 14, 16 hours; some days are shorter when you’re on set and you’re only in one scene, maybe you’re in and out pretty quickly,” he said. “Other days that are more frequent than the days on set (are the days) that you’re looking for work, maybe you’re taking a class or you were doing a show or just writing.”

Some higher profile acting gigs have come his way.

He was the starting quarterback for the fictional Kentucky Buckets football team in a series of KFC ads.

He also was in a memorable Southwest Airlines spot, where he mistook a long-haired dog for an attractive woman.

He also had a small role in the award-winning TV miniseries “The People vs O.J. Simpson” and did a sketch for Jimmy Kimmel.

As for the tv sports career he left behind….
“People ask me if I miss it and I say yes every day. But there’s another dream that, with all of the sports I played growing up, was maybe a little bit on the back burner, so I am super happy to be pursuing that…”