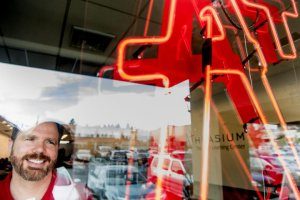 Jerry Post spent more than 25 years in the news business, 20 of them at Morgan Murphy’s KXLY in Spokane, WA.

But last October, he left his job as news director to head in a new direction.

The former news executive said when he was ready for a career change, he looked for “something rewarding that would give back to the community and a business I could run myself.”

He appears to have found it in numbers.

In December, Post opened a Mathnasium learning center in a former Radio Shack.

His franchise, one of more than 800 in the country, is geared toward students wanting to keep their math skills current, brush up for SATs or get some help on work they struggled with during the year.

“Math battles can become stressful between parents and kids,” Post said. “Parents are often quite emotional when they contact me.”

In the six months he has been in business, he’s been surprised by the number of people who have been willing to drive a distance to sign up and take the math refreshers.

So much so, that he is already thinking of at least one more location.

“It’s everything I was hoping for in this job,” he said. “The immediate difference you can make one kid at a time. It the most meaningful thing I could have done.”