Former Immigration and Customs Enforcement (ICE) spokesperson James Schwab opened up to “CBS This Morning” about why he abruptly resigned in March. 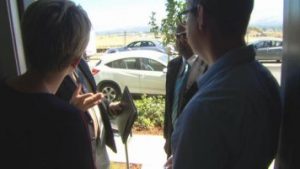 But his interview was crashed by agents from the Department of Homeland Security (DHS) who unexpectedly showed up at Schwab’s front door and demanded to speak with him.

Schwab told CBS the agents asked if he’d been in contact with Libby Schaaf, the mayor of Oakland, Calif., who rankled conservatives earlier this year when she warned city residents of a pending immigration sweep.

“Why, three months later, are we doing this?” Schwab asked. “This is intimidation. And this is why people won’t come out and speak against the government.”

He added that he has not had any contact with Schaaf.

Schwab told CBS he quit his post after Attorney General Jeff Sessions made a public claim that ICE failed to make 800 arrests as a result of Mayor Schaaf tipping off the community to ICE’s planned raid.

Days earlier, in a carefully worded statement, Schwab told the media that “some” arrests had been lost due to the tip off.

He said he felt compelled to resign after the current administration told him to lie about the incident.