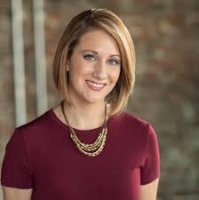 Amanda St. Hilaire has turned up at Tribune’s WITI in Milwaukee, Wisc. as an investigative reporter.

Until recently, St. Hilaire was a weekend anchor-investigative reporter at Nexstar’s WHTM in Harrisburg, PA where she was one of a flock of female news staffers who fled the station while charging a hostile work atmosphere existed.

St. Hilaire was one of several station employees involved in a human resources complaint filed in August of 2017 against GM Robert Bee.

I stand with Flora.

I stand with Dawn.

I stand with Carrie.

I stand with those who have the conviction to speak the truth when no one else will.

I stand with those who struggle with the weight of whether, when, and how to speak up and share their stories.

Most of all, I stand with you and your right to equality, professionalism, and respect in the workplace.

She also stands, ex post facto, with Giant Supermarkets, which this week yanked its advertising from WHTM, citing the various charges of sexual and workplace discrimination against the station making their way through the legal system