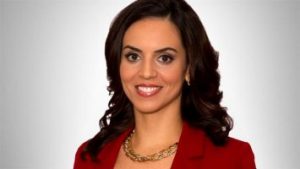 When we last saw KRIS anchor Stephania Jimenez, she was in the middle of a controversy when the late-evening newscast she was anchoring in Corpus Christi was interrupted by vulgar whispers.

Now, she is set to resurface on the weekend morning anchor desk at NBC’s WCAU in Philadelphia later this month.

The bizarre incident at the Cordillera station last March came as Jimenez was reading a story, only to be interrupted by the voice which was heard to say “f**k it, lick it, smell it.”

Jimenez delivered an on-air apology for the bizarre interruption

In Philadelphia, she will join Dray Clark on the weekend anchor desk and replace Rosemary Connors, who has been promoted to NBC 10’s 11 a.m. weekday show.

Jimenez has also worked as an investigative and consumer reporter-anchor for NBC Connecticut in Hartford and KTSM-KDBC in El Paso, Texas.