A sharp-eyed NewsBlueser sent this one along: 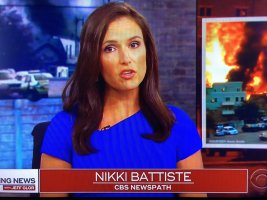 Wednesday night night on the “CBS Evening News” reporter Nikki Battiste was identified in the chyron as being with  “CBS Newspath” as opposed to just “CBS News.”

While no one outside of the business would really have any idea, the flub did evoke a certain measure of nostalgia among folks who remember when CBS Newspath was a major asset to affiliates.