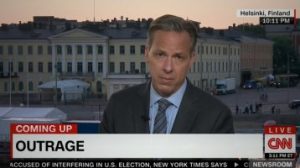 CNN finally decided “less is more” after long spell of trying to fit essay questions in its lower third by condensing the text to near-unreadable size.

As Jake Tapper anchored from Helsinki Monday, the lower third had one word: “Outrage,” which was in reference to response to Donald Trump’s joint news conference with apparent BFF Vladimir Putin in Helsinki, Finland.

It could also refer to the network’s inability to achieve brevity in its lower thirds.

Achieving brevity would be a nice habit. 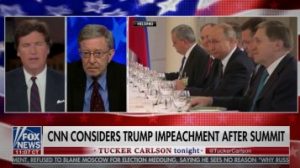 Opting for incoherence was Fox News, again on Monday, when, during the vaudeville hour hosted by Tucker Carlson, a banner popped up that read “CNN considers Trump impeachment after summit.”

Who knew Wolf Blitzer wielded that kind of power?