How bad did it go in Helsinki?

The Administration played a walkback two-step Tuesday as Mr. Trump told a hastily-assembled White House press corps he has full faith in US intelligence agencies and their assertion that Russia meddled bigly in the 2016 election.
(But, he extemporized, others might have done it, too.)

“In a key sentence in my remarks, I said ‘would’ instead of ‘wouldn’t.’ The sentence should have been, ‘I don’t see any reason why it wouldn’t be Russia.’ You can put that in,” Trump instructed reporters at the White House. “I think that probably clarifies it.”

We wonder how many reporters rushed by to their desks to change Monday’s quote. 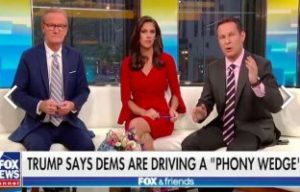 Well maybe this morning, the Kids on the Kurvy Kouch will comply.

They weren’t so conciliatory Tuesday morning,

Brian Kilmeade: Thanks to Robert Mueller’s probe, we know the 12 names of the people at least on the Russian side, state sponsored, if these numbers are correct, we have no reason not to believe it, who were part of the hacking into the election. Not affecting the result, but going ahead and creating chaos in our electoral system. When President Trump was asked about that, he fell short.

Steve Doocy: And so the criticism of the president from both sides of the aisle is, wait a minute, you were given a choice, do you believe Russia or do you believe your own intel community, and he had that answer, which is puzzling to me because there have been a number of times when the president has said that I think it was Russia. I think it was Russia. I think there was meddling. He had the chance yesterday. He did not do it.

Otherwise, over the past 24 hours of watching Fox, we might have thought we had slipped through a crack in time and ended up in another Fox alternate universe.