The journalists of Fox News are increasingly pushing back against the daily Trump anti-press tirades, even though the trend hasn’t spread to the vaudevillian sycophants of their prime-time and early morning opinion-based programming. 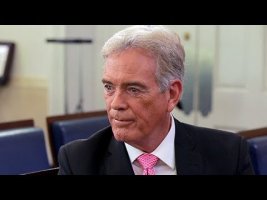 The latest is Fox’s Chief White House Correspondent John Roberts who duly noted Thursday’s Toxic Twitter rant from 1600:
“The Summit with Russia was a great success, except with the real enemy of the people, the Fake News Media. I look forward to our second meeting so that we can start implementing some of the many things discussed, including stopping terrorism, security for Israel, nuclear……..”

Roberts responded:
“President Trump doubles down on his “fake news media – enemy of the people” mantra for reporting that his meeting with Putin was widely panned by members of his own party. That makes me an enemy of the state.”

That won’t get him invited on “Hannity” or “Tucker Carlson” anytime soon.