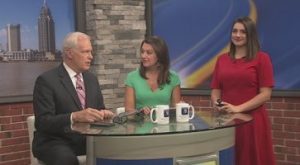 Nexstar has moved its Mobile, AL station WKRG to a temporary set, in preparation for new set.

Now the guessing game begins, according to our NewsBlues correspondents.

It’ll be interesting to see whether the station gets a set similar to sister station WNCN in Goldboro, NC.

Bets are being taken.