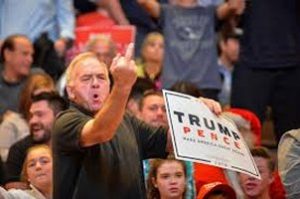 Yesterday we told you about a Fox News contributor’s pretty terrific idea of how to stop the circus atmosphere at Mr. Trump’s grievance rallies by taking the press out of the line of fire (and also removing them as a handy prop for Mr. Trump and his finger-waving audience) and limiting coverage to a couple of pool reporters.

Since April 28, there have been ten of these campaign rallies around the country.

Fox News has carried every one of them live, start to finish, for a total of 11 hours and 21 minutes of airtime.

Last week alone there were three.

CNN’s total time is zero and MSNBC has weighed in with eight minutes of “live” excerpting of the rallies.

In revenue value, that’s about $20 million in free airtime.

And since these are political rallies, not policy speeches, that’s a pretty big political contribution on Fox News’ part.

They are fast closing in on CNN’s contribution during the 2016 campaign.