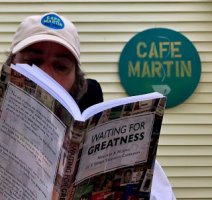 Last May, we told you the story of former NESN sports videographer John Martin’s battle with amyotrophic lateral sclerosis or ALS.

Now he’s written a book about his 19 years behind the scenes of Boston red Sox and Boston Bruins broadcasts.

“I always maintained during my television career, I’d someday write a book chronicling my experience,” Martin told the local blog, Sports Rip. “Tried a few times but couldn’t get it going. Always knew the title. A year and half past retirement, I just started dictating one afternoon. It took me a month and a half to put together.”

Martin is now confined to a wheelchair. He was first diagnosed just last year.

According to SportsRip, his book sold more than 200 copies in its first day.