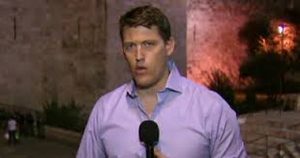 Powell made his departure public via Facebook post last week., noting that he will head back to the U.S. in “the coming days.”

“Those of you who have spoken to me in recent months, you will understand why I am leaving FNC,” Powell said in the post.

A veteran foreign correspondent, Powell butted heads with the office of Israeli P.M. Benjamin Netanyahu last year after suggesting in a May 2017 tweet that Netanyahu told Pres. Trump not to move the U.S. Embassy from Tel Aviv to Jerusalem.