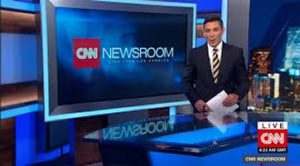 The California-based “CNN Newsroom Live from Los Angeles” which frequently aired on CNN/USA in addition to CNN International is history and its anchor, John Vause, is being pulled back to Atlanta.

Of course it did.

The program’s demise was low-profile – when CNN International’s new programming lineup was unveiled earlier this week, this edition of “Newsroom” was conspicuous by its absence.

One of its unique, albeit dubious, attractions was that it featured West Coast-based pundits live in studio instead of via remote.

We’re on record with the position that pundits, live, remote, recorded or caged, are no real advantage.