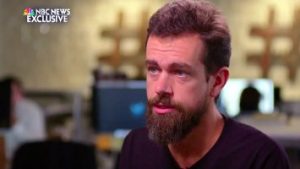 So Twitter CEO Jack Dorsey thinks that by giving performance artist/conspiracy peddler Alex Jones a seven-day suspension he will force the InfoWars shyster to change the well-ingrained habits of the past 20 years.

The Kinks wrote a song once upon a time called “Jack, The Idiot Dunce” that now appears to have been well ahead of its time.

Jack, Jones is already on your site complaining about his suspension. 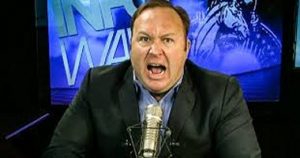 A clearly agitated Jones claimed the remarks that got him suspended, in which he urged supporters to get their “battle rifles ready,” was intended to warn his followers to prepare to defend themselves, not incite violence.

“They’re hitting me everywhere with lies,” said Jones, adding, without a hint of irony. “It’s a hoax.”

How is that possible?

Jones’ personal account has been suspended but not the InfoWars account – so Jones used it Wednesday morning to deliver a 13-minute video to his 889,000 followers.
“It’s time politically and economically and judiciously and legally and criminally to move against these people. It’s got to be done now. Get together the people you know aren’t traitors, and aren’t cowards, and aren’t hedging their frickin’ bets like all these other a**holes do, and let’s go, let’s do it. Because they’re coming,” Jones said.

Jones’ rant labeled the mainstream media as the “enemy,” and called on his followers to take action before these outlets engage in a “false flag” operation to deceive the public.

Dorsey calls his move a “time out.”

A” time out” is what you give a 5-year-old who is misbehaving in the estimation of Dorsey’s interviewer, “NBC Nightly News” anchor Lester Holt.
“A ‘time out’ seems minor compared to the implications of someone suggesting a call to arms against a particular group, in this case the media,” Holt pushed back.