Fans of Sonny Apkan may remember his 2004 hit “Use What You Got” and that’s what Jacksonville’s WJXT an independent station with a news-format schedule, had to do, putting its new digs to heavy use covering breaking news after Sunday’s mass shooting.

If the staff was shaky using the new set, viewers sure couldn’t tell as an array of new branding graphics flashed and the news set background changed at times.

According to Newscaststudio.com “The station also used its “River City Live” lifestyle show’s set for interviews about the shooting — with a small circular table and two stools in a corner with a large photo of the Jacksonville Landing property on the video wall array next to it. The set’s backlit elements were also changed to red for these segments, instead of their normal light teal.” 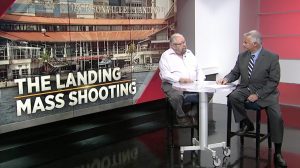 Sometimes trial under fire is the best training around.