That is how program co-host Gayle King put it on Thursday’s edition of the “CBS Morning News,” with this week’s ouster of CEO Les Moonves and “60 Minutes” Executive Producer Jeff Fager.

She and her seat-mates, Norah O’Donnell and John Dickerson went on 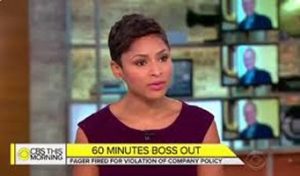 Duncan  asked Fager for a reaction to the latest “New Yorker” article outlining allegations against Moonves and him.

Fager didn’t even bother to veil his threat to Duncan:
“If you repeat these false accusations without any of your own reporting to back them up you will be held responsible for harming me. Be careful. There are people who lost their jobs trying to harm me and if you pass on these damaging claims without your own reporting to back them up that will become a serious problem.”

Fager still doesn’t think this threat was grounds for dismissal.

In the meantime, it is now looking that Moonves’s support on the CBS board is melting away as more revelations seems to indicate he was also playing them for suckers.

There is even speculation he might not get a severance package.