Les is gone, but what about his wife, Julie Chen?

The above quote is her sign-off on last night’s episode of “Big Brother” so, as a couple, they’re apparently tight. 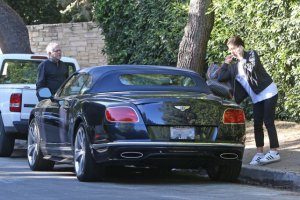 They haven’t gone to ground and in fact, were spotted outside their L.A. home where a moving truck and crew were spotted bringing out packing supplies.

Yes…that’s a Bentley they’re hanging around.

While she is expected to finish out this season of “Big Brother”, she remains a no-show this week on “The Talk”

Which is just as well, since the bad behavior of former CBS execs continued to be a hot topic of conversation on the afternoon program – most recently the departed Jeff Fager.
“I just think it’s so refreshing that this old regime of the boys club, guys taking care of guys…”, ensemble member Sharon Osbourne said, “I just think it’s great to clean house.”

“The Talk” panel also expressed support for CBS News correspondent Jericka Duncan who got that threatening text from Fager Sunday warning “There are people who lost their jobs trying to harm me and if you pass on these damaging claims without your own reporting to back them up that will become a serious problem.”

There’s been quite a bit of speculation about Chen’s future at CBS, her fortunes tied so closely to Moonves as they are.