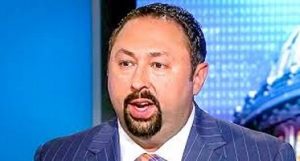 Jason Miller, who evidently feels he has a reputation to defend, is stepping away from his CNN political gasbag role.

Miller, who was the incoming Trump Administration’s communications director for about 15 minutes until it was discovered the married bozo was the baby daddy to another Trump operative’s child, is now embroiled in an increasingly ugly child custody battle with baby mama A.J. Delgado.

Her legal team is claiming that the pro-Trump commentator had an affair with a woman from a strip club and gave her an abortion pill without her knowledge – and they have the woman’s statement to back up their claim.

Miller, who denied the accusation, announced his departure from CNN in a statement he shared on Twitter.

“I have decided to step away from my role … to focus on clearing my name and fighting the false accusations being made against me,” he said.

With Roger Stone long gone, Paris Dennard suspended and now Miller out the door, CNN will soon be forced to have Ana Cabrera play both pro- and anti-Trump roles during those endless shoutfests they use to fill up time.