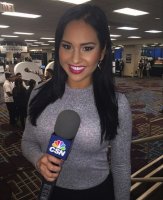 Siera Santos, who recently wrapped up a three-year run reporting for NBC Sports Chicago, has found another job right there in town.

She’s landed at Fox-owned WFLD as a freelance sports anchor and reporter.

She, of course, is thrilled

“I’m thrilled to join the @fox32news team!” she tweeted.

Santos previously worked as a reporter and anchor at CBS-owned KCBS and KCAL in Los Angeles.