Here’s something you don’t see every day:

A television station rolls out a new personality, piece of gear, updated studio and doesn’t  make a big noise about it. 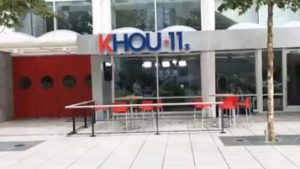 And yet, that is exactly what Tegna’s KHOU in Houston did with its Avenida Studio in downtown Houston.

The satellite facility made its debut Friday afternoon during the 4 pm newscast and Houston blogger Mike McGuff was suitably impressed.

You can take a virtual tour via this Facebook Live done by reporter Tiffany Craig, who was the first to do a piece from the new facility.

Complete with wooden looking floors and a nice rug where the anchor desk sits, lights, cameras with teleprompters – the studio opens directly into the lobby of the George R. Brown Convention Center.

They are probably saving the promotional noise for the unveiling of their new fully-fledged facility, replacing the one that was wrecked by Hurricane Harvey last year.