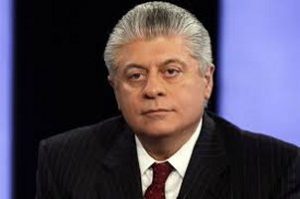 Fox News senior judicial analyst Andrew Napolitano finds himself swimming against the opinion tide at his network more and more these days – evidently because he takes his role as an ANALYST of the LAW far more seriously that some of his colleagues do – most notably, reliable Trump apologist Gregg Jarrett.

Napolitano’s latest exercise in contrarianism came Tuesday as a shot across the bow of Mr. Trump for Trump’s characterization of sexual assault allegations against Supreme Court Justice Brett Kavanaugh “a hoax,” and a “disgraceful situation, brought about by people that are evil.”

“I do not think the best thing that was said was ‘evil’ or ‘hoax,’ and I honestly wish that the president and his people would get past that,” Napolitano said Tuesday on “Fox & Friends.”

“The Supreme Court does not have an army to enforce its rulings. Its rulings depend upon the intellectual legitimacy of the manner in which the rulings are given, from whom they are given. They really have some work to do to patch up the divisions that exist in the public mind. These divisions don’t exist in reality in the court.”

Pearl-clutching ensued on the kurvy kouch.