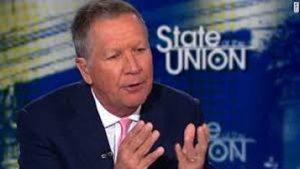 That hypothetical question may be running through the head of Ohio Governor John Kasich, whose term as the Buckeye State’s Chief Executive is drawing to a close.

While his “Never-Trump” stance would seem to have him flirting with a 2020 presidential run, he might also be eyeing a return to his cable bloviator roots.

From 2001-2007, Kasich presided over a weekend gabfest on Fox News and also filled in on ”The O’Reilly Factor.”

Now that Fox has signed itself over to the Administration, it can be assumed that Kasich is no longer welcome.

So he’s been talking to both CNN and MSNBC in recent weeks.

In fact, at one of his recent meetings with CNN boss Jeff Zucker, an agent reportedly showed up to sit in.