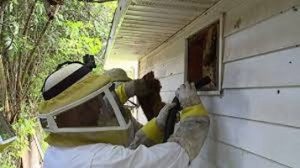 “This is probably the craziest thing I ever done in my entire life,” WGNO reporter Adam Bowles claimed.

We have to agree.

Bowles went along when a New Orleans area company was called out to deal with its specialty – the removal of unwanted bees and their hives.

Turned out that the Tribune station reporter was the star of the removal process.

He successfully captured the queen bee which ensured the survival of the colony once removed to a new, and less threatening, location.

Check out the process here.