Don’t look for Oprah Winfrey to be back on “60 Minutes” any time soon. 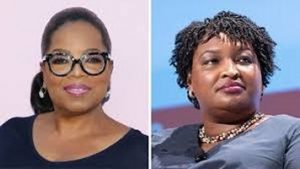 She’s taking a leave from the program after a year of doing occasional pieces, to hit the campaign trail for Georgia gubernatorial candidate Stacey Abrams, the Los Angeles Times reports.

“Oprah Winfrey and CBS News have agreed that she will step away from her contributor role at ‘60 Minutes’ during this campaign season, in keeping with CBS News standards,” the network said in a statement.

No word on when or if Winfrey will return to the show.

She made her first appearance Thursday and drew rave reviews from….Fox News.

We kid you not.
“Oprah Winfrey has a spiritual connection with so much of this country, and it was built over years and years of doing that talk show. I said, when we were watching it, I said ‘If that women can get folks to eat pizza with a cauliflower crust on it, she is going to get that woman elected,’” according to “Outnumbered” panelist Dagen McDowell.

Don’t take her word for it.

Judge for yourself in this excerpt.
“I have voted Republican and I have voted Democrat, and each time I voted, I voted for the people who I felt represented my values,” Winfrey said. “Democracy is not just about our individual rights and concerns and our individual protections, but rather it lives and thrives in making sure that everybody is lifted by the community.”