A half-century spent in tv news wraps up at the end of the week in Green Bay at Sinclair’s WLUK. 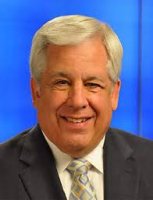 Anchor Tom Milbourn is retiring from the station where he’s held forth since 1994.

His advice for the next generation of journalists is to “stay the course.”

Milbourn’s television career included serving as news director and anchor in Madison, Lansing, Mich., and Champaign, Ill. before coming to Green Bay in 1987.