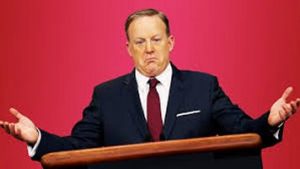 Is anyone surprised that perpetually ineffective press secretary Sean Spicer needed to toss in his two cents worth in the wake of the Jim Acosta-White House dustup?

Spicer, whose usefulness ended when Melissa McCarthy stopped spoofing him on “Saturday Night Live” went on with Maria Bartiromo of Fox Business Channel to endorse the new set of behavior mandates issued to reporters who attend the infrequent White House press briefings.

The new rules, which effectively try to put an end to followup questions at the gatherings, caused the shedding of crocodile tears when Spicer was asked to react to them.
“Well I think it’s sad and unfortunate that it’s come to this, you have to mandate professional behavior and decorum because a few bad apples are trying to make it about themselves and make a show of what is supposed to be an opportunity for journalists to ask the president questions.”
“…[N]ow we’ve come to the point we’ve got to treat them like children and put down rules and regulations so that people can actually behave.”

Spicer would know something about dealing with children, given that his previously highest position at the White House prior to his short tenure behind the press podium was as the Bush-era Easter Bunny at the Easter Egg Roll.