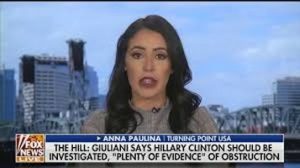 So will Anna Paulina someday come back as a Fox News talking head?

Or will her Thanksgiving gratuitously over-the-top insult of Hillary Clinton prove her undoing?

Her apology tour is underway.

“Yesterday on Fox I was placed on the wrong segment & in the confusion made a brash and unprofessional joke. To Fox and those watching, I am deeply sorry,” she wrote on Friday.

Placed in the wrong segment?

That’s a new one.

Paulina, who is “director of Hispanic engagement” for ultra-conservative Turning Point USA, was sitting on a panel discussing – what else? – Clinton’s oft-investigated emails when she tried on a simile that did a full-on face plant.

“She won’t go away. She’s like herpes,” Paulina said.

Her remark caused substitute host Rick Leventhal to look momentarily pole-axed before he cut the segment short – but not before Paulina suddenly disappeared from the panel.

“We are going to wrap this segment a little bit early because of the language that was used in the segment, and we apologize to our viewers for that,” explained Leventhal

Later, another substitute host, Arthel Neville, did another apology.

“We are all Americans, and that is the focus and we want to reiterate that we do not condone the language that Anna Paulina just displayed here, and we apologize to Secretary Clinton for that,” she said after the segment concluded. “Fox News does not condone her sentiments.”