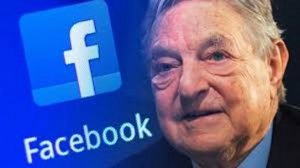 Mark Zuckerberg and Sheryl “Lean-in” Sandberg have their patsy for the covert investigation of George Soros that Facebook undertook after he criticized the social network.

Elliot Schrage, the company’s outgoing head of communications and policy, said he was responsible for hiring the company, Definers Public Affairs, to investigate who was behind the “Freedom From Facebook” campaign.

Schrage’s admission came in an internal memo:
“In January 2018, investor and philanthropist George Soros attacked Facebook in a speech at Davos, calling us a ‘menace to society,’” Schrage wrote in the memo. “We had not heard such criticism from him before and wanted to determine if he had any financial motivation. Definers researched this using public information.

“Later, when the ‘Freedom from Facebook’ campaign emerged as a so-called grassroots coalition, the team asked Definers to help understand the groups behind them. They learned that George Soros was funding several of the coalition members. They prepared documents and distributed these to the press to show that this was not simply a spontaneous grassroots movement.”

In other words, Facebook didn’t like Soros’ criticism. So the group the company hired found that Soros had given money to several coalition members. He wasn’t funding or coordinating the campaign.

Sandberg has already walked back her claim she never heard of Definers.

And that Facebook, in effect “didn’t mean to” play into an anti-Semitic narrative against Mr. Soros.

“Didn’t mean to,” in this parent’s experience, is the excuse of an 11-year-old who did something patently stupid and then really doesn’t want to own up to it.

And someday we should talk about Facebook’s disastrous effect on local news.