If we were expecting CNN correspondent Jim Acosta to suddenly turn deferential after the lifting of his press credential temporarily a few weeks back….

Well, really we weren’t. Acosta’s combative style is his brand. 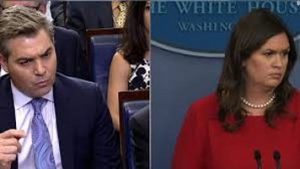 What was surprising is that at the first White House press briefing held by Sarah Sanders in a month, Acosta was called on.

ACOSTA: …the intelligence community when it comes to Russia meddling. Why doesn’t he have faith in his advisers?

In what appeared to be a breaching of the “new rules of decorum” at the briefings, Acosta got in a question on the legal woes of former Trump campaign manager Paul Manafort, and a trio of follow ups.

And Sanders didn’t take the bait.

If there wasn’t one obnoxious reporter in the press gallery asking questions in a confrontational manner, this White House would have to invent one.