You will barely know who they are and you won’t know what kind of punishment they’re receiving, but Fox News sternly proclaims it is punishing the “Fox and Friends” staffers who got a little TOO chummy with former EPA administrator Scott Pruitt. 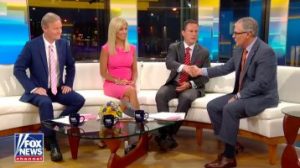 According to emails revealed in a Freedom of Information Act request submitted by the Sierra Club, former Environmental Protection Agency administrator Pruitt chose the topics for interviews, and knew the questions in advance during his appearances on the kurvy kouch of “Fox and Friends.”

In one instance, Pruitt’s team even approved part of the show’s script.

Cable-news veterans told The Daily Beast that it is common for television producers to discuss topics in advance with their subjects; and, on occasion, producers will ask pre-interview questions to understand what a subject has to offer, and why their information is relevant.

However, it is widely frowned upon to offer public officials pre-interviews, as this can help the official avoid difficult questions.

And providing and seeking approval of scripts is even more of a taboo.

In an email chain ahead of a May 2017 appearance on Fox News by Pruitt, his spokesperson corresponded with “Fox & Friends” producers Andrew Murry and Diana Aloi. Aloi said she would send “pre-interview questions on the agreed upon topic, the new direction of the EPA, and helping communities that were poorly served by the last administration.”

Aloi then sent the script of the segment opener to Pruitt’s team for approval. In Pruitt’s Fox & Friends hit the next day, host Brian Kilmeade read from the script, as it had been approved.

As you might expect, Fox News said in a statement, “This is not standard practice whatsoever and the matter is being addressed internally with those involved.”

Which is so much fertilizer.

Nothing happened after the manufactured Seth Rich murder conspiracy story which was subsequently withdrawn.

Nothing happened after Sean Hannity showed up as a “surprise guest” at a pre-election  Trump campaign rally, despite a harrumphing Fox press release that said it wasn’t going to happen.

But we’ll play along this time around and pretend someone or ones are really in trouble and that a determined management is determined to do something about it so that it doesn’t happen again.