We were working in Sioux Falls, South Dakota when a young anchor-reporter over in Mason City, IA disappeared back in 1995. 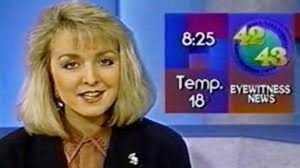 Then, as now, it was a small world in tv news and many of the people in our newsroom knew personally, or knew of Jodi Huisentruit.

The program reportedly will include an interview with John Vansice, believed to be one of the last people to see the KIMT anchor alive.

In March of last year, the Mason City Iowa Police Department executed a search warrant searching for GPS data on a car owned by Vansice.

That warrant is sealed.

Huisentruit disappeared while on her way to work June 27, 1995, in Mason City. Investigators have never found her.

Huisentruit told a colleague she was on her way to work early that morning but never arrived. Police found signs of a struggle outside her Mason City apartment.

She was declared legally dead in 2001, and no one has been charged in her disappearance.