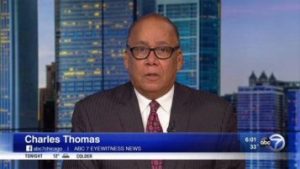 Charles Thomas, who retired as political reporter at Disney’s WLS back in 2017, is now in politics, as senior advisor to Chicago mayoral candidate Amara Enyi.

“Unlike most of the other contenders, she is truly the independent, ‘change’ candidate,” Thomas said of Enyia. “She has a base of millennials — inspired by Chance the Rapper’s endorsement — that is adding Chicagoans of all ages including ‘graybeards’ like myself. I see this campaign as a beachhead for the next generation of this city’s political leadership, and I am excited to be involved.”

Thomas spent 25 years at WLS before his retirement and most recently co-hosted a morning radio show in Chicago.