Rhodes publicly broke the news in a tweet, calling the eight years since he joined CBS News “incredible.” 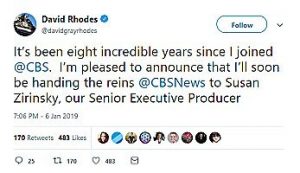 Zirinsky is a 46-year veteran of CBS News and the top producer of the “48 Hours” newsmagazine.

Rhodes’ contract was set to expire in February, and there had been widespread speculation within the news division about his future, as CBS is cleaning house after the scandals that have plagued the news division, the network and its parent company recently.

A good time for Rhodes to “consider new opportunities.”