CBS News plans to be a big digital player in the 2020 election and has already assembled and named its team of embeds for the cycle.

We are embracing political reporting now more than ever on every program and every platform,” said Christopher Isham, vice president and Washington bureau chief for CBS News. “This is a critical time in our nation’s politics and CBS News will be at the leading edge of campaign coverage. ” 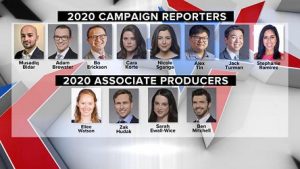 Looks a tad monochromatic, but what the hell do we know?

CBS News will also be continuing to produce “Local Matters,” the segments on CBSN which give national audiences an insider’s understanding of political issues on the local scene around the country.