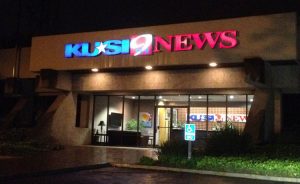 There’s been quite a bit of breathless “did they, didn’t they?” reporting over the past few days over the question of whether CNN dumped the notion of using a KUSI reporter to do an immigration story because the reporter failed to line up with CNN’s perceived stance on the notion of a border wall.

This is the same McKinnon-owned station in San Diego that we reported last November was bubbling over with internal turmoil over what was dubbed “The Kavanaugh Rape Joke” allegedly written by gm Mike McKinnon that news director  Steve Cohen is said to have left on the assignment desk in general view.

As we have heard from a NewsBlueser, “Cohen actually had to hold a station wide meeting claiming that he had a “lapse in  judgement” when he finally admitted he did in fact write the hand written Kavanaugh Rape joke.”

In this latest drama involving CNN supposedly deciding against using one of its reporters for a border-fencing story because it didn’t fit the network’s narrative, Cohen issued a statement over the weekend denouncing an Associated Press headline (“TV station backs off accusation that CNN played politics.”) about their position as “fake news.” 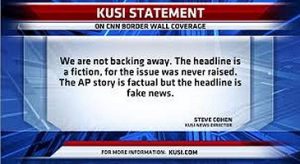 Our source tells us “Cohen never even SPOKE to CNN.  The booking went through the assignment desk as it always does, and neither of the Assignment editors were never asked by CNN – “What angle are you taking on the wall?” They don’t do that, they’ve never done that in my…years in the business.”

As we reported yesterday, the body of the AP story said that Cohen, in an interview with the AP, had “conceded” that he didn’t really know why the network turned down his offer to have KUSI reporter Dan Plante appear on CNN to discuss how the border fencing was working in the San Diego area.

He just made a guess as to the reason and went with it.