In the wake of the media feeding frenzy off a “Buzzfeed News” report that claimed Mr. Trump directed his former lawyer Michael Cohen to commit perjury before Congress – a report later rebutted by Special Counsel Robert Mueller’s office, some media outlets just couldn’t let go of that “Breaking News” banner. 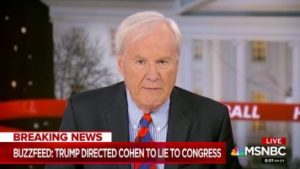 For instance, MSNBC, which went virtually wall-to-wall in its coverage of the story to the point that it was still throwing up that “Breaking News” banner 21 hours after the story originally broke.

Can we just retire that “Breaking News” thing?

We think viewers have caught on and no longer regard it as anything worth looking up from their Instagram feed for.

And Buzzfeed News continues to stand by its story.