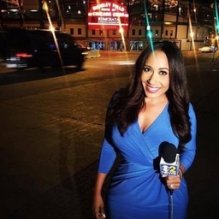 After being off the radar since November, she wants you to know the deal….up to a point.

“I’m currently on a medical leave and look forward to returning to the station in the future, in good health,” she said in a statement. “I am extremely grateful for my CBS family supporting me during this time.”

And dammit, that’s all you need to know.

The CBS O&O has zipped lips.

Bigos joined the station in 2015 from WCCB in Charlotte, North Carolina, where she was a reporter and weekend news anchor.