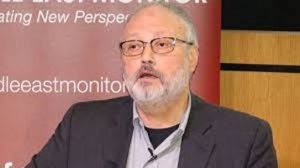 This Thursday, the Committee to Protect Journalists will host an “outside the White House” press conference to demand justice for murdered Saudi journalist Jamal Khashoggi.

That is an action that one time would have been led by the Freedom Forum, before its resources were diverted to erect a monument to ego and self-absorbed industry navel-gazing. (See previous story)

The event comes the day before the Trump Administration is supposed to be delivering a report to the Senate on Khashoggi’s murder and whether and to what extent Saudi Crown Prince Mohammed bin Salman might have been involved.

Unless the dog ate their homework.

Khashoggi, an outspoken critic of the Saudi regime in opinion pieces in the Washington Post, was murdered in the Saudi consulate in Turkey.

Though details of just how and why remain sketchy, it appears tied to that criticism.

A vibrant Freedom Forum might have had even greater weight in demanding answers.