The Federal Communications Commission has its work cut out for it as it tries to defend its dismantling of net neutrality rules. 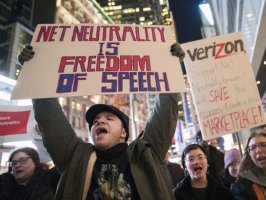 A three-judge panel of the US Court of Appeals for the District of Columbia Circuit heard oral arguments Friday in the opening session of lawsuit filed by more than three dozen entities, including state attorneys general, consumer advocacy groups, and tech companies such as Mozilla and Vimeo.

Among the topics engendering the panel’s skepticism: the claim that net neutrality hurt investment in broadband (victimology is a major tool of mega-businesses today), the disregard of public safety agencies’ arguments against the FCC’s dismantling and the overall argument made by the FCC that ending net neutrality was in the public interest (it’s not).

Despite the skepticism, it will likely be an uphill battle to roll back the FCC action.

But we have been surprised before.