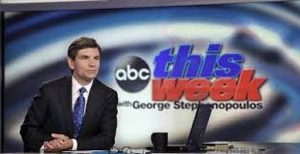 ABC News has a LinkedIn ad up, looking for  a new executive producer  “This Week with George Stephanopoulos.”

Which would be a pretty good indication that ABC is open to looking outside the network for the program’s new EP.

The current EP Jonathan Greenberger is helping with the search.

He’ll stick around as the division’s Washington bureau chief, a role he has held since 2014.