Life after tv news usually involves a pr job, something in the nonprofit world or writing a book.

Or you survived all the interoffice or corporate b.s. and actually retired without so much as one stint in rehab. 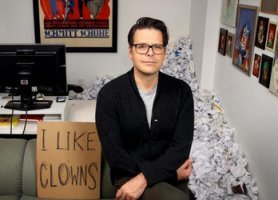 Phil Johnston’s life after tv news is on quite a different track.

A track that last night led him once again, to the Dorothy Chandler Pavilion in Los Angeles and the Academy Awards.

Back in the 90’s, Johnston was a bureau reporter for KETV in Omaha, NE.

It was there he met his future wife, Jill Cordes, who was the station’s morning anchor.
(Aside: prior to her Omaha journey, we had the pleasure to hire and work with Jill at our former Sioux Falls stomping grounds, KSFY. Now she’s a Hollywood denizen)

Johnston co-wrote and directed “Ralph Breaks the Internet” which so far has grossed half a BILLION dollars and still counting.

It’s his first outing as a director.

And while he didn’t win this time around (an animated Spiderman movie won – as expected by many including Phil), he spent the evening in some heady company.

He also co-wrote “Wreck-It Ralph” and the Oscar-winning “Zootopia,” so last night was not his first rodeo.

Back in the day, Phil and Jill left Omaha for Minneapolis where he toiled away for a few more years as a reporter.

Then a move to New York where he earned a Master of Fine Arts at Columbia and started his journey into movie-making.

Yes…sometimes life after tv news can be magical.