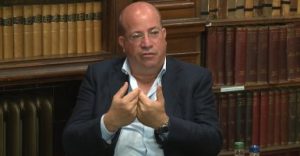 CNN honcho Jeff Zucker is still dealing with internal and external blowback over his decision to hire political operative and former DOJ flack Sarah Isgur as a political editor at CNN, just in time for the 2020 election cycle.

According to a “Wall Street Journal” article, Zucker said many reporters who covered the Justice Department had endorsed Ms. Isgur.
(Name two, ok?)

During a Friday morning editorial conference call, Zucker also tried to clarify Isgur’s actual role with CNN, saying she wouldn’t be making decisions about political coverage, and that the network’s political director, David Chalian, whom she will report to, will continue to steer 2020 coverage.

Poor Jeff is said to be “very reluctant” to address Isgur’s hiring because he is “very uncomfortable discussing individual employment.”

But “I do fully understand the confusion and the conversations that have taken place, and I don’t want us to ever shy away from being able to have this conversation”…

You still got some ‘splainin’ to do, Mr. Zucker.